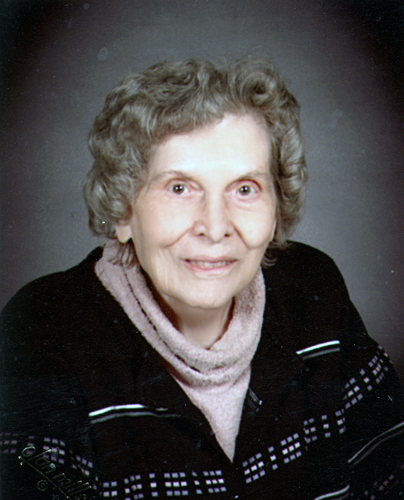 Edith Davidson was born August 21, 1917, to the late Edward Brooks Wetherill and Laura Katherine (Yerkes) Wetherill. She died September 19, 2015 at the age of 98! Upon her death, Pleasant Community Church was given 15% of her estate through a trust set up by Edith herself to fund attendance at summer Bible Camps and to support Missionary Programs (both local and international and both short-term and long-term). A quarterly disbursement of interest money designated for Pleasant Community Church is distributed for church use as prescribed by the Trust. This very substantial gift is a blessing to the church and its ministry. We thank Edith for her life of dedication to God’s service and for her continued legacy giving to further His work.

She was born in the Bucks County, PA town of Stoopville. When Edith was two, her father passed away of the Spanish influenza and her mother Laura served as head of the household after that time, caring for her 4 children. Edith never really knew her father, Edward Brooks Wetherill, however he was born March 18, 1884 in Bucks County, PA to Cyrus S. Wetherill and Sarah Anna (Worthington) Wetherill. He died January 16, 1919 at the young age of 34 years, 9 months and 28 days. After Edward’s death and prior to 1930, the family moved from the farm in Stoopville, PA to a home located at 14 New St. in Hatboro, PA. Edith’s mother, Laura Katherine Yerkes Wetherill, brother Edward Leroy Wetherill, and sisters Laura Carolyn Wetherill and Mary Elizabeth Wetherill all resided together at the home in Hatboro.  Living next door to the Wetherills in Hatboro was Laura’s brother Harold Yerkes, at 18 New Street, which was certainly a help for the Wetherills. In 1940, Edith and Carolyn were already working as school teachers and their brother E. Leroy worked at the foundry as an enamellist. Mary had no work listed in the 1940 census, but she worked as a missionary with Israel’s Hope of Brooklyn, NY.  By age 27, Edith had lost both of her parents as her mother Laura died due to chronic valvular heart disease on November 29, 1944. Laura Wetherill’s parents were Charles H. Yerkes and Mary Jane (Walton) Yerkes. Edith and her 3 siblings lived together with their mother in 1940, and until her death in 1944. Below are some early pictures of Edith and two of her siblings. There were no pictures readily available of Mary Wetherill, her other sibling. The whole family was musical, playing piano, singing and Leroy played many instruments including making music on a saw!! His saw playing earned him national recognition in 1981.

Her siblings remained single, it seems, throughout their lives and all remained in Hatboro, PA. They were buried with their parents upon their deaths. Leroy died on May 21, 1995 – 85 years old. Mary was next, dying October 27, 1996 at age 82. Carolyn died January 26, 2000 and was 89. Edith outlived them all, dying in 2015 at the age of 98. It is unclear why the Wetherill children all remained single except Edith. The Wetherill family is buried in Newtown Cemetery in Bucks County, PA. 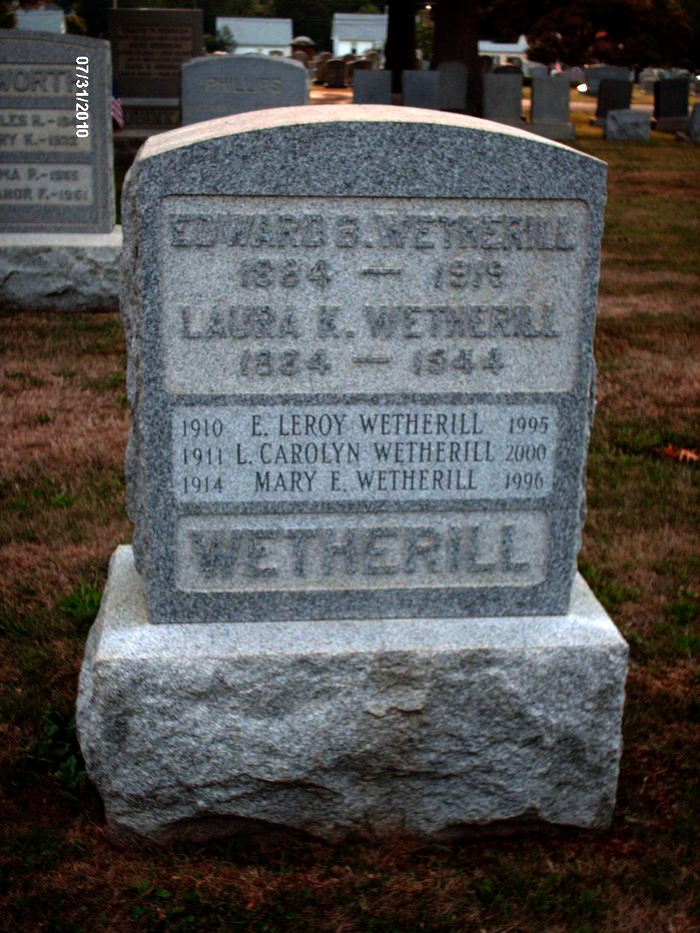 On Saturday July 30, 1949, Edith Wetherill of Hatboro, PA married the Rev. Herman Alfred Davidson of Orchard Street – Warren, PA. They were married in Glenside, PA at the Wharton Avenue Baptist Church.  Rev. Davidson was serving the First Mission Church in Ludlow, PA. After their marriage the Davidsons lived on Church Street in Ludlow. Herman Davidson was born in South Renovo, PA on August 26, 1906. His father was Axel Davidson and his mother was Christine (Hansen) Davidson, both born in Sweden. Axel Davidson was a founding member of the Swedish Congregational Church in Renovo. He died October 1, 1936. Christine had died several years earlier on January 10, 1913 during childbirth. Herman lost his mother when he was only 7 years old. Herman had 7 siblings, Florence M, Chester P., Rudolph H., Axel W., Ruth C., Ellen N., Elsie E., and Raymond who was adopted. After the death of his father Axel, Herman and his sister Florence worked and lived at Christ’s Home in Warminster, PA a widow and orphans home. This facility is still located in Bucks County, PA. Edith had been born in Bucks county and lived in Montgomery County, not far away. 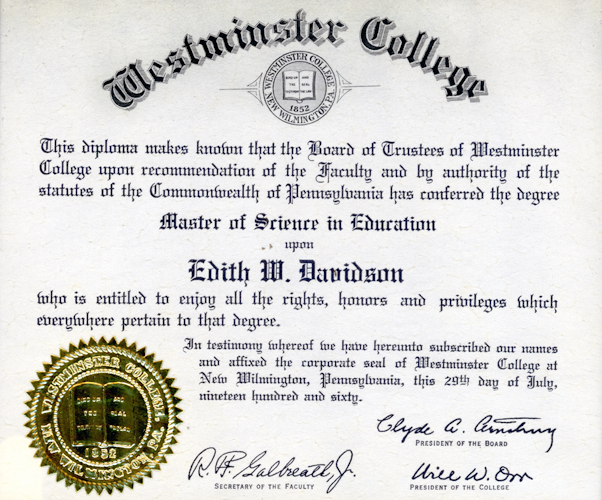 Edith taught at the Horsham School near her hometown; Thomas Williams, Jr. High school in Wyncote, PA; taught at Centennial Schools in Southampton, PA; served as Principal at the Ludlow School in Ludlow, PA; taught at Wilcox, PA High School; West Shore Schools in Lemoyne, PA;  Mahoning School in New Castle, PA; Brokenstraw School; and then with the Warren County School District. She served as itinerate librarian in 8 Warren County schools, and established the elementary school libraries in Pittsfield, Youngsville and Irvine PA. After retirement, Edith was active in the Pennsylvania Association of School Retirees and the Warren Senior Center. She was active at Bethlehem Covenant Church and its successor, Pleasant Community Church and enjoyed teaching the Wednesday morning Women’s Bible Studies at the church and was loved and respected by the women she mentored.